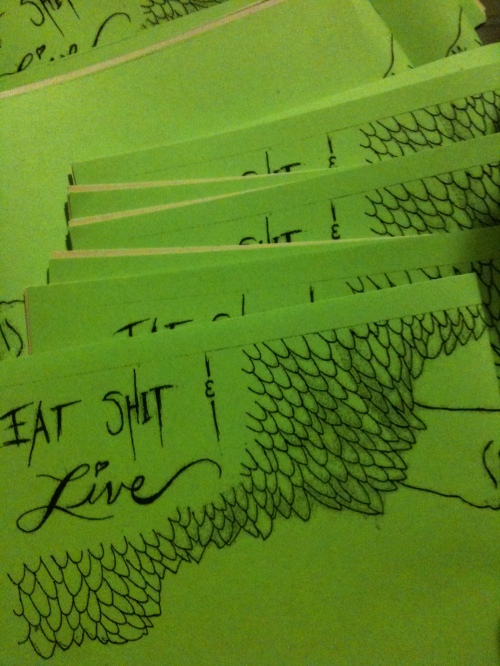 This is some stuff that I picked up from Riverside DIY Print Fest. As mentioned in a previous post, it’s fun to share what titles we got, like digging through our pile of stuff at the end of the day. It’s communicating what/who’s art and writing we enjoy. This is Elliot typing, and this is what I picked up.

Queer Youth Visibility Project – They distro’d several titles. I have “Polycats #1,” dismantle binaries meow! I can’t find the other titles, in the box somewhere.

Powers of Jen – She had donuts for her new zine, “Donut Adventures!” Also “Some Cats” from Modesto and Turlock, CA. And I learned how make a “Korean Smoothie.”

OMGcow – “Writerman” is a cool mini zine about writing, and “Hourly Comics” is a part of Shieka’s series of diary comics.

Budget Press – Two poem zines, “Insta-matic” by Hunter Manasco and “Dry Heat” by Jennifer Stoever. Johnnie B Baker, publisher of BP, was recently featured in an interview by Vice.

Jenée Jernigan – “Survival of the Fittest” print with a cockroach on it, limited to 25.

Check out Brodie’s interview with Angela Chaos at The Shakeytown Radio Hour!

One response to “Loot from RDIYPF’12”